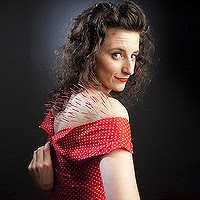 Felicity Ward in The Hedgehog Dilemma

An astute blend of hilarity and heartbreak, Felicity Ward’s The Hedgehog Dilemma explores the conflicting demands of our need for intimacy versus emotional self-preservation, in an hour of finely crafted and deftly performed stand-up.

Greeting her audience in a wedding dress – the origin of which is soon made painfully clear – Ward embarks on a confessional but never cloying story about breaking up, moving back in with mum, and a tentative new relationship. Her winning tales of woe are punctuated by everything from filthy jokes and a slide show to clever physical comedy – including a delightful impression of a resentful axolotl.

Her performance is remarkable and her material inspired, whether she’s dancing to Joy Division, pointing out the foibles of her fellow comedians, or revelling in the unusual mating habits and remarkable genitalia of hedgehogs.

Wicked, heartfelt and wonderful, Ward’s latest show is sidesplittingly funny and so honest it hurts.

This review originally appeared in The Age on Thurs 5th April 2012.

Posted by richardwatts at 1:49 pm